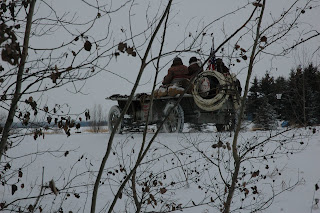 Please note that the story begins at the bottom of the site.

Through the internet we were able to identify a number of libraries, archives, and museums that had a few photos. The New York Library had a number that we had not seen as had the Library of Congress. We eventually located a number of photos never before seen at the Chicago Library and soon after that a number at the Detroit Library. But there were not nearly enough to make the film. We had heard about a bit of news reel that had been shot at the beginning of the race. We tracked it down to the Library of Congress. When we phoned the head archivist we were told that the nitrate film had been lost to flooding in the 1960s... as had the "paper" copyright version. The paper version was a process where they would make an 8x10 photo from each frame of the original negative. This was done because nitrate was so unstable. A dead end.

We had read that a photographer from Denver had driven to Cheyenne with his new "moving picture camera" and did in fact film the arrival of the cars in Cheyenne. It was later shown in Denver as news reel. After much phoning, emailing, and writing of letters to archives and his estate, we discovered that this footage was also lost and thought destroyed. During the 1950s and 1960s massive amounts of old nitrate film was destroyed because of its tendency to ignite spontaneously.

Around 2004 we received an email from a lady in Las Vegas (Lisa). She had some photos of the race and wanted to know if we would like them. Wow! Kerrie and I made travel arrangements and headed to Vegas. We met Lisa in one of the restaurants at the Mirage. There in the dim light she opened a shoe box. It was filled with large format negatives and a contact sheet that she had had a local photographer made. I had seen some of them before ... but then we saw probably 20 that we had either not seen ... or not seen the entire original photo! We were able, for instance, to show the shot of the Thomas with Monty at the wheel rolling into Cheyenne! That same photo had been heavily cropped in earlier books and noted as "the drive through Buffalo." In fact, it wasn't. We arrived at a price, I went to the ATM, got a handful of money and Lisa was as happy about that as the fact that we were going to use her photos in the film. The next day she graciously drove us to the Hoover Dam. It was a great trip...and we had discovered almost 2 dozen never before seen Alaska and Cheyenne photos.

We knew that a big part of the story was going to be the Italian and German points of view. We had read the memoirs and seen the photos. We knew there had to be more. We asked Miriam if she might check to see if there were any still in Berlin, the home of Koeppen's publisher. Much of Berlin (and its archives) had been destroyed with the bombing of WWII. But, in the end she discovered about 40 photos of the race in a German archives...again, most which had never been seen before.

Over the years we received photos from enthusiasts in Vladivostok, Moscow, Japan, Paris, and across the US. During Miriam's research in Paris she even found the archives for the Le Matin newspaper ... most people thought it was long gone, but she found the remains, in Germany.

During our US research we had heard that most of the auto makers of the day would take photos of their cars to show to prospective buyers: how they were made and to show them off in beautiful settings. We knew that the ER Thomas company also did this. And we knew that the New York Times reports on the trip had taken numerous photos. In fact, they were mandated by the editor to take a certain number of photos per day.

We finally learned that such a "book" of photos was somewhere in Buffalo. It was supposed full of ER Thomas promotional pictures and the NY Times collection. It was known as the Fink collection, but no one we had talked to had seen it since the 1950s. At least we knew it existed. During one of our trips to Buffalo we met with Jeff's parents in the small town where George Schuster had lived and died. When we walked in the back door there was a stack of old photograph albums on the table. It was them! 1000s of original photos. With all of our research we had only been able to discover who last held them but could not find his family. Jeff's Mom knew the family name. She opened the phone book, found a number, dialed it, and yes they still existed. They were in the attic of Fink's family and had not seen the light of day since the 1950s. Wow! We made a deal with the estate immediately and had them shipped to our Edmonton office where they were immediately scanned at 600dpi to discs and hard drives. We almost had enough to make our film!
Posted by The Greatest Auto Race on Earth at 12:00 PM