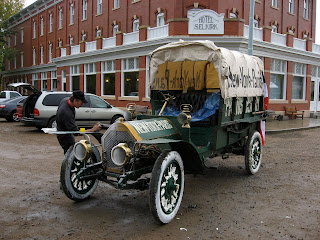 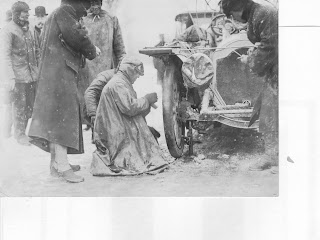 Please note that the "Making of the Film" starts at the bottom entry.
The research was chugging along, the photos were being scanned and sorted, we had researchers trying to determine the exact route of the race, and Joshua (AD) had begun casting.
We wanted to dramatize a number of the key elements in the race to give the viewer a sense of what they went through; the "mud, the blood, and the beer" as I called it. We also wanted the viewer to sympathize and get to "know" the characters in this story: Monty, Schuster, Hansen, Williams, McAdams, Sirtoria, Haaga, Scarfoglio, Koeppen, Snyder, and a host of other players.
There are a number of different points of view about re-enactments or the dramatization of historical events. Some producers believe that there should be no re-enactments (e.g. The Civil War series by PBS), others believe that they add to the story; some believe that they should not deliver dialogue if you are using re-enactments while others believe that the dramatic bits need to be heavily scripted. This has been a huge debate amongst history producers and always comes up at the annual History Producers Conference in New York each winter. And we thought long and hard about it.
In the end, we had two lists for shooting. The first was all the scenes where a driver or reporter would be on camera. They would be delivering words either from their memoirs or from the newspaper reports of the day ... and we had a mountain of papers.
For instance, we had Monty commenting on the day to day activities of the race from NYT's reports. We normally had him "present" his thoughts from the seat of the Thomas Flyer. If it wasn't written down, we didn't have the actors say it.
Schuster's comments on the race came from his memoir. As his book was written in the past tense, we decided to shoot his scenes as if he were telling us a story from his gas station in Springville, New York after the race. And we used his unpublished memoirs.
The same applied for a number of scenes. One of my favourites was when the Italian team broke down near Kenton in the US west. From their accounts we knew what was broken and how they fixed it. We also had a very good sense of the "mood" of what the three Italians discovered when they took the rear end of the Zust apart. To create the "mood" we let the actors read the actual words from the book. Then, while we went to Voice Over, the actors created a scene for the cameras that was accurate to the book, accurate to the mood, but all ad-libbed in Italian. We do not hear the details of the live re-enactment before the cameras because we did not know exactly what they said ... but the lively discussion in Italian in the background added to the spirit of the written/spoken word of Antonio. In the scene in Russia where the Zust is believed to be the cause of the death of a little boy, Franco (the actor playing Antonio) brought real passion, sorrow, and grief to the scene. It was fanatastic. It was such a powerful moment that there were real tears on the set for an incident that had occured 99 years before.
Joshua spent the better part of a year looking for the right actors. We wanted actors that could not only act, but ad-lib, look similiar to their Great Race characters, and be flexible in their time for 18 months of off and on filming.
Some of the characters fell in to place immediately. Williams and McAdams were perfect as was the George Miller character (Mark Stubbings). The Italian team needed to speak English and Italian (and learn the Naples accent in the case of Antonio). I was surprised how fast we found them ... and they were perfect! The Schuster character was harder to find; in fact, we cast this part twice. In the end, the Schuster we found was perfect. All of the actors were into the roles and did a little research on their own characters ... and brought that research to the film set!


Posted by The Greatest Auto Race on Earth at 11:29 AM